Where to watch:  Streaming on Netflix 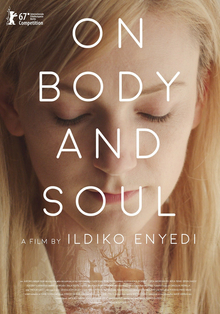 The country of Hungary is riding a hot streak at the Oscars in recent years.   The powerful Holocaust film Son of Saul won in this category just two years ago.  And last year,  the Hungarian short Sing, a sweet film about a children’s school choir, won in the Live Action Short category.

This year Hungary is represented again in the foreign language category with On Body and Soul.   This movie introduces us to Endre, the CFO of a slaughterhouse.  He is good at his job, respected by his workers, but seems to live an empty existence.  Endre (played by Geza Morcsanyi) has one of those faces that is a road map of his life; every wrong turn, every bad decision is written in the creases.   A new  quality control expert begins working at the slaugtherhouse.  Maria (played by Alexandra Borbely) has an almost angelic, ethereal quality about her.   She is strikingly beautiful, which gets everyone’s attention.  But she also appears to have Asperger’s syndrome, or something which places her on the autistic spectrum.  She is very intelligent, but lacks simple social skills.  Even navigating a mundane lunchroom conversation is beyond her.

We see her at home, using Lego characters to replay and re-imagine interactions in the workplace.   After a workplace theft, a psychologist is brought in to interview the entire staff.  One of the psychologist’s questions is about dreams.  Endre and Maria separately narrate an identical dream.  Both dream that they are one of a pair of deer in a forest.  The psychologist thinks they are playing her for a fool and confronts them.  Soon Endre and Maria begin an awkward, unconventional courtship.  Could they be having the same dreams?  Are they meeting in their dreams?

One could call this a romance, but it does not follow a conventional path.  The film takes it time, giving the viewer the opportunity to discover details along the way.  What makes the film a pleasure to watch is the power of the two lead performances.  I had imagined that Morcsanyi must be a veteran Hungarian actor, with dozens of films to his credit.  Lo and behold, this is the Hungarian playwright and professor’s feature film debut, at the age of 65.   Equally impressive is Borbely’s performance as Maria.  She manages to inhabit the character in a way that is believable, and never slips into caricature.

There are a couple of scenes that some viewers may find disturbing.  The movie is set in a slaughterhouse, and some scenes were clearly shot in a working slaughterhouse, with very real animals being killed and carved.  The scenes are brief but clearly real.

Another memorable scene shifts tone from gruesomely uncomfortable to awkwardly funny in a way I’ve never quite experienced in a movie before.   This is not a perfect film, but it is a memorable one. The love story of  Endre and Maria will stay with me for some time.  Like our best dreams, it is not fully formed, but has a power beneath the surface that lingers after waking.