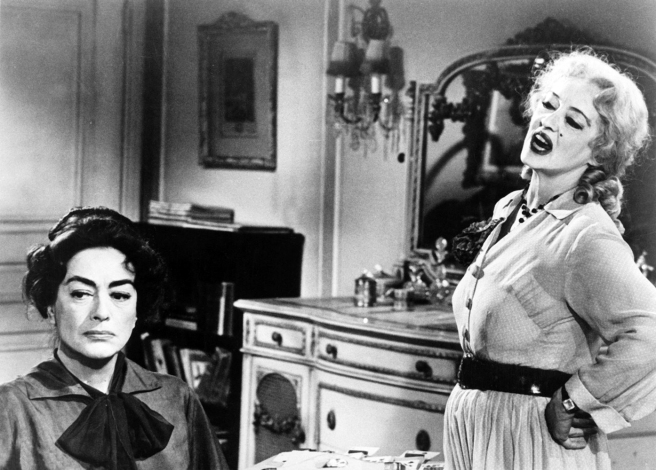 The new anthology series Feud debuts March 5 on FX, with season one (Bette and Joan) focusing on the often tortuous (and occasionally tortured) relationship between Bette Davis and Joan Crawford.   I expect good things from this series.  Creator Ryan Murphy hasn’t made a real misstep yet, and the casting of Susan Sarandon and Jessica Lange in the starring roles certainly looks promising.  So this seems like a perfect time to take a look at the movie that launched the titular feud.

The movie opens on the vaudeville stage, with a young blond girl singing and dancing for a star-struck crowd.  She is not only a popular performer, but a bit of a marketing phenomenon as well.  Her father hawks life-size Baby Jane dolls (with matching blond ringlets) from the stage.   Jane’s dark-haired sister Blanche stands in the wings, radiating envy.  Not only does Jane get all the attention, she is also a spoiled brat.

Twenty years later, the tables have turned.  Blanche is a popular Hollywood actress, while her sister Jane struggles to keep herself out of the bottle long enough to act coherently.  One night after a party, an accident occurs, leaving Blanche paralyzed.  Did her own sister run her down?

This is the set-up of the movie, which jumps to the early 60’s, where we find Blanche (Joan Crawford) dependent on her sister Jane (Bette Davis) for her care.  Jane is resentful of her sister’s popularity before the accident, which had eclipsed her own, and resentful for having to care for her.   Jane is drinking far too much.  She also appears to be going completely bonkers.

This film does a marvelous job of slowly increasing the tension, as Jane’s behavior towards her sister grows more sadistic.  We begin to wonder if Blanche can possibly survive her sister’s cruelty.   I found myself really rooting for Blanche by the end of the film, which has an ending as strange and unpredictable as the movie deserves.

The first time I saw this movie was on late-night cable, maybe 15 years ago, and my memories were of rather campy performances.  Seeing it again, I was astonished at what a well-made film it is.  The bulk of the movie takes place in the Hudson sisters’ house, and the black-and-white cinematography, set design, musical score, and Oscar-winning costumes all combine to create a perfectly realized setting.   The acting is quite good throughout.  Joan Crawford creates a truly sympathetic character (and it takes a lot for me to sympathize with Joan Crawford.  Ever since seeing Mommie Dearest on HBO when I was about 10, she has thoroughly creeped me out).   And sure, Bette Davis’ performance does become campy at times, but in this particular role, I don’t think the term “too much” applies.

If you read enough of my reviews, you know I’m all about the character actors.  So I have to mention a couple. Victor Buono chews up the scenerey in his Oscar-nominated supporting role as a petulant man-child who is able to transform himself into a charming, Peter Ustinov-sounding English gentleman to woo Bette Davis out of some cash. Poor Victor died very young, but left his mark in this and a couple other fine roles.   And Maidie Norman is great as the housekeeper, who brings both tenderness and strength to her role.  Maidie had a long and prolific career, mostly in television.  If you are my age, you probably saw her in 15 different shows and never realized it.

Director Robert Aldrich had a very solid career, and he is almost forgotten today.  He basically launched the “crazy old lady” (some prefer “psycho biddy”) sub-genre with this movie, which had many imitators (most famously Aldrich’s own Hush, Hush  Sweet Charlotte).

The Feud series contends that the movie studio encouraged on-set rancor between the two stars.  I don’t know if that is true, but it certainly didn’t bleed over into the finished film.  (Well, Bette Davis does really seem to be enjoying herself when slapping and kicking Joan around).  It is rumored that  Crawford was upset when Davis received an Oscar nomination and she did not.  Bette Davis believed that Joan Crawford was campaigning against her, which may have contributed to her loss.  Or maybe, dear Bette, Anne Bancroft won for The Miracle Worker because she deserved it.   At any rate, Crawford had the last laugh.  Because Anne Bancroft was unable to attend the ceremony, and Crawford made arrangements in advance to accept the award on Bancroft’s behalf if she won.  Crawford’s smile as she walks out to accept the award  is certainly quite gleeful.  How much of that is because Bancroft won, and how much because Davis lost?

At any rate, Whatever Happened to Baby Jane is a good psychological thriller that holds up well after 55 years.  Below you can watch the clip of Joan Crawford accepting Anne Bancroft’s Oscar for Best Actress.