Where to watch:  Criterion Collection blu-ray, released in 2017 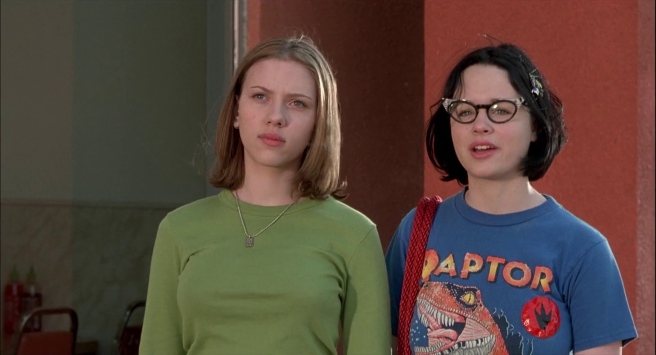 We’ve all known someone like Enid.  Remember the self-proclaimed “outsider” in high school who spoke dismissively of everyone?  The person who dressed with a seeming disregard for fashion, but simultaneously cultivated a look designed to attract attention?   When someone ridicules Enid’s green hair and leather jacket, telling her that punk is over, she angrily says that she is not displaying copycat punk, but a genuine 70’s punk look.  What’s the difference?

The movie begins with Enid (played by Thora Birch) and Rebecca (Scarlett Johansson) graduating from high school.  And they have a plan, of sorts.  They will get jobs, and rent an apartment together.  That is as far as their concept of “adulting” has taken them.

While looking at apartments in the classifieds, the girls see a missed connection ad, written by a  man who helped a woman find her contact lens and believes they may have “had a moment.”  Enid responds to the ad, pretending to be the woman in question and setting up a date at a retro diner called Wowsville.   Enid and Rebecca show up at Wowsville to spy on the man and have a laugh at his expense.   When he shows up in his prearranged green cardigan, Seymour (played to perfection by Steve Buscemi) is just as pathetic as they imagined he would be.  But his growing discontent at his absent date becomes unbearable for the girls to watch.

What starts as a cruel joke leads to the  friendship at the heart of the film, as Enid follows Seymour home, and finds in him a kindred spirit.  Seymour is also an outsider, who claims he “can’t relate to 99% of humanity.”   Enid claims that she will help Seymour find a woman, and they bond over the course of the movie.

While Rebecca begins to move on with her dream, getting a job and finding an apartment, Enid seems stuck.  Those high school classmates that she looked  on with such disdain?  Perhaps she isn’t so ready to leave that world behind.   Her feeling of confusion, of being trapped in the netherworld between childhood and adulthood (whatever that is) is captured perfectly.  This movie does have a plot, and a story arc, but it is by no means a conventional film.  The genius of this movie is in the little things, the small details, the background characters that inhabit this almost fairy-tale world. 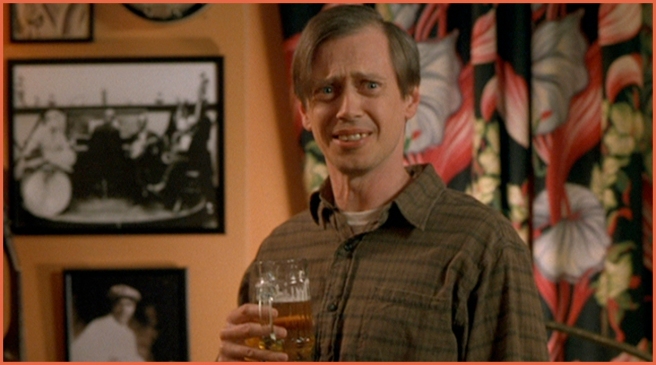 At least Seymour is self-aware enough to realize his life could be better.  He owns 1,500 vintage 78’s, having pared his collection down to “just the essentials.”    But he understands that his passion for his hobby has helped to sequester him from the world.  “You can’t connect with other people, so you fill your life with stuff” he tells Enid., a commentary not just on himself, but on consumer culture.   The sad irony is that in helping Seymour to expand his horizons, Enid begins to lose him, much to her disappointment.  After all, he is the one who gets it, who gets her.  He can’t become one of “them.”

There is an underlying theme in the film that attacks not just consumerism in general, but the lack of authenticity in modern society, whether in the 50’s diner that plays innocuous 90’s electronic bubble gum pop, the aptly named band Blueshammer or Enid’s art teacher (the always wonderful Illeana Douglas) who isn’t so much concerned that art moves people as that it makes a “statement”, and any statement will do.

This is a movie about people whose lives are in stasis.  Everyone is looking for a change, looking for the spark that will get them from here to there, wherever “there” may be.   No one is more symbolic of this than Norman, an old man sitting on a bench every day at a decommissioned bus stop, waiting for a bus that will never come.  Until it does.  Maybe belief has to precede action.

The movie is based on a graphic novel by Daniel Clowes, and retains the emotional feel and overall aesthetic of the book, while expanding the story greatly.   The performances in the film are wonderful throughout, not only in the main characters, but also those who show up for a scene or two, or inhabit the background.   The late Brad Renfro has a good supporting role, as does the sublime Bob Balaban.

Ghost World is a movie that rewards multiple viewings.  There are so many subtle details are that easily missed.  Listen for the TV commercials, heard but never seen, for an oil company that cares about the environment.  Or watch the background of the scene where Enid and Rebecca go apartment hunting.   Did you see that young woman pass left to right, on screen for only a couple seconds?  (Yes I meant the pregnant woman, smoking a cigarette and toting an open bottle of beer! )  I won’t disclose any more;  I’ll leave it to you to find our own details.

It’s impossible to talk about this movie without mentioning the music.  Most of the soundtrack consists of existing music rather than original scoring.  And the director Terry Zwigoff  assembled one of the most unique soundtracks ever created for film.  The opening credits feature  “Jaan Pehechan Ho” an Indian song from the 60’s movie Gumnaam, which is so infectious I couldn’t get it out of my head for days.  The bulk of the film features music from the 1930’s, early blues and Lionel Belasco instrumentals which fit so perfectly, it’s as if they were written expressly for the movie. 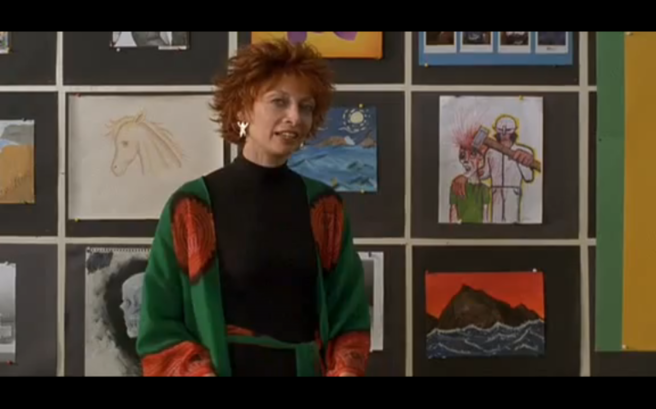 This is a movie that takes chances; it mixes tone, it doesn’t follow a conventional story line, and it has an ambiguous ending.  That can be a recipe for disaster if it doesn’t work.  In this case, everything works perfectly.  I love this movie.  I love every single minute that I  inhabit this world, and I’m sad when I leave it.

Some people see the ending of the movie as a pretty dark and final metaphor.  I guess it depends on what you bring to it, but I think this misses the overall tone of the film.  Enid ultimately wreaks havoc on the life of Seymour, and his only response is to forgive her.  In this forgiveness she finds the courage to believe in herself.  I think the future could be bright for Enid.  Maybe even Seymour will love again.  But he’ll always keep those 78’s.  Just the essentials, of course.