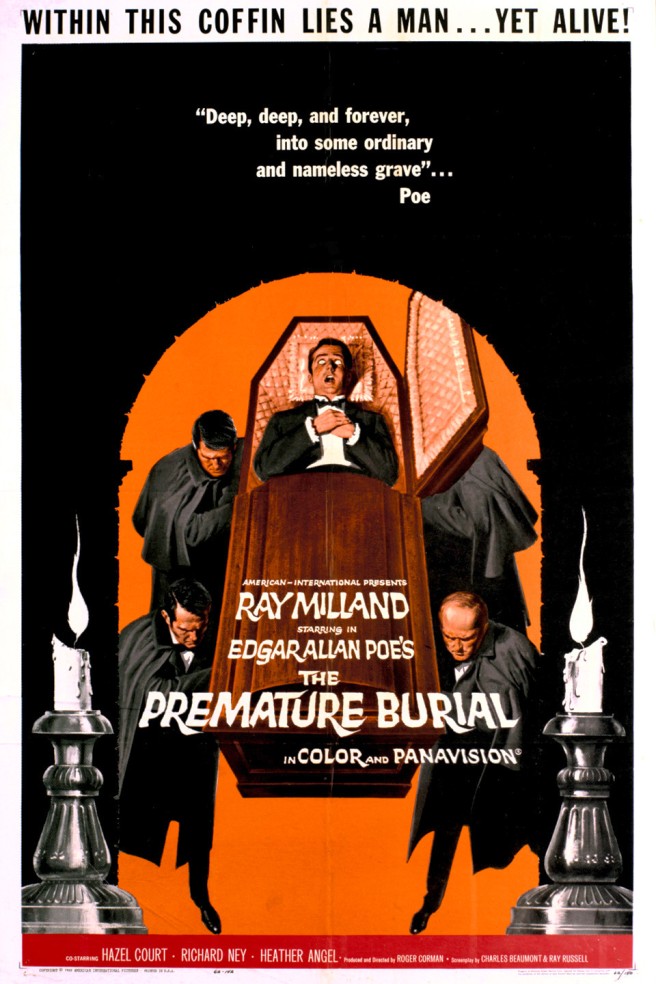 As I was doing a little research for this write-up I noticed something.   A couple of different articles used the phrase “B-movie director” before Roger Corman’s name.  As if he needs some kind of qualifier.  I think you could make a strong case for Roger Corman as  the most influential filmmaker of the 20th Century.   Yes, he makes B-movies.  Yes, his plots often stretched the bounds of credulity.   But perhaps no-one else has overcome the limitations of small budgets as successfully as Corman.   And for the people who worked on his sets, it was akin to going to film school. This is a short list of directors who cut their teeth on a Corman set:  Martin Scorsese, Jonathan Demme, Peter Bogdanovich, James Cameron, Ron Howard, Brian DePalma, Curtis Hanson…I could go on, but you get the drift.   This dude influenced an entire generation of filmmakers, who went on to change the course of cinema.   And the assistant director on this movie, The Premature Burial?  A young man named Francis Ford Coppola.

Corman had the idea of adapting Edgar Allan Poe’s story The Fall of the House of Usher to the big screen in 1960. One of the reasons it appealed to him was because Poe’s stories were in the public domain, hence no need to pay the author.  The studio  he worked for, American International Pictures, was used to small budgets and short shooting schedules.  Corman convinced them to make one color film in lieu of two black and whites, and they agreed. The gamble paid off because the film was a hit.  American International would go on to make 8 movies based on Poe stories.  They all starred Vincent Price, except for one:  The Premature Burial.

Ray Milland stars in this adaptation of the Poe story.  Of course that story was only eleven pages long;  essentially the movie is an entirely new story, with only the concept of being buried alive taken from Poe.  The story was adapted by Charles Beaumont, who wrote dozens of screenplays for The Twilight Zone TV show.

Milland is Guy Carrell, a well off man living with his sister Kate (Heather Angel) in the family house.  His dead father suffered from catalepsy, a condition in which a person can appear to be dead while still alive.  He believes that his father was buried alive, and worries that he may suffer the same fate.  He calls off his engagement to the lovely Emily Gault (Hazel Court), but she convinces him that she loves him no matter what, and they marry.

Try as he might, Guy cannot stop obsessing over being buried alive.  He builds a coffin and sepulchre for himself, equipped with escape mechanisms in case his worst fears come true.  He begins spending almost every waking moment in this tomb.  Finally his wife gives him an ultimatum; either her or the tomb. He chooses his wife.

Just when he thinks he has overcome his fear, strange things start happening.  The family cat becomes trapped inside a wall of the house.  The local gravediggers appear before Guy, then disappear.  Is he imagining all of this?  Finally he is frightened to death.  Or is he?   I will leave the surprises of the final act to the viewer.

This is an entertaining film,  although not really a frightening one.   It is a tale in the Gothic tradition.  The set design is visually compelling, if clearly fake. There is never a single moment in this movie when the viewer is not aware that he is looking at people on a constructed movie set, whether the scene is set outside or in.  And yet, somehow this visual motif works for a movie that has live burial as its main theme.  I wouldn’t go so far as to call the movie camp, but there is a hyper-real quality to the material.

The performances are all well-suited to the material.  Ray Milland in particular fascinates me.  Here is a man who never stopped working for half a century.  He won an Academy Award for best actor in The Lost Weekend; he starred in prestige pictures like Hitchcock’s Dial M For Murder.  After a two-year run as the star of his own TV show, he spent the 60’s and 70’s appearing in a long sting of B-movies, beginning with this one.  His performance helps to elevate this film to something more than just a cheap shocker.  If you haven’t watched any of the Roger Corman Poe adaptations, this isn’t a bad place to start.  You probably won’t be frightened, but you will be entertained.