Where to watch:  Limited theatrical release, streaming on Amazon

When a movie opens with a title card explaining to the viewer how unique and special it is, I am immediately leery.  Oh, brother!   In this case, we are told that this is the first completely painted movie ever made. Each frame was painted with oil on canvas;   it took a team of over 100 painters to create the 65,000 images in the film.  In retrospect, I’m glad they did give us this information up front.  Fortunately, the film is in no way gimmicky.  It is a surprisingly rich and powerful story.

The movie is based primarily on the later years of the famous post-impressionist painter Vincent van Gogh.   The movie opens a year after van Gogh’s death, with an unopened letter that Vincent wrote to his brother Theo.   Vincent’s old postman, Joseph Roulin,  asks his son Armand to return the letter to Theo.   And this is the beginning of a great journey, that will send Armand first to Paris, and then to Auver-sur-Oise, where van Gogh lived out his last days, and ultimately where he died.

Along the way Armand will talk with several people, who fill in gaps in van Gogh’s past.  We meet van Gogh in several flashbacks, which are painted and filmed in a start black and white. Armand’s feelings about van Gogh shift as he uncovers more about the past.  There is also a mystery surrounding van Gogh’s suicide (or was it murder?)  which takes a prominent place in the story.

All of the main characters in the film are based on historical people, many of whom were painted by Vincent at some point.  The actors in the movie did not just provide their voices;  they were filmed practically, and later each image was painted over individually.  It is possible to recognize Chris O’Dowd’s face behind Postman Roulin’s great beard, and Saorise Ronan is instantly recognizable as Marguerite Gachet, a young girl who befriended Vincent in his last year.

Film making is well into its second century now, and it is refreshing to see this joint Polish-British venture find a new way to tell a story visually.  If you are a fan of van Gogh, or of his style of painting, then this film is an absolute must-see.  It is rather like spending ninety minutes inhabiting a van Gogh painting.  Or better yet, seeing the world with his unique vision.  Many of the scenes recreate specific paintings.  But you don’t have to be an habitue of art galleries to enjoy this movie.  The story is well developed and told, the talent is strong, and the visuals unique.

Armand’s journey through the film is ultimately frustrating on some levels.  He is unable to deliver the unopened letter to Theo, who died just a few months after his brother.  And Armand is left with more questions than answers, as indeed is the viewer.   There are many specific details about Vincent van Gogh’s last days that we will never know.  But he certainly gave us plenty of detail, in his hundreds of paintings.   He left it all there, the pain and the beauty.  Shouldn’t that be enough? 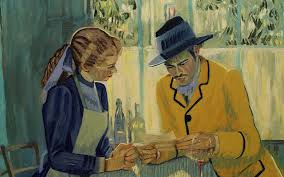